Vigil of All Saints

Join in this annual parish event celebrating the vigil of All Saints on Sunday, October 31st after the 8pm Mass. 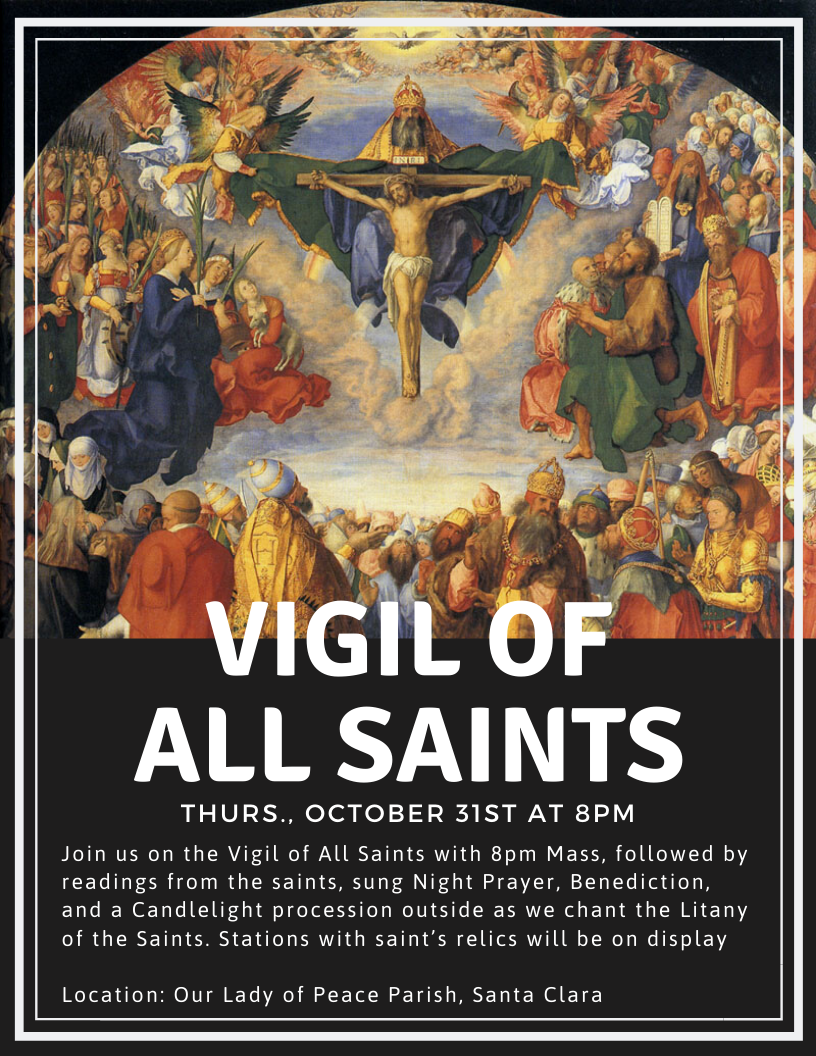 Confession available throughout the day

On the occasion of the 50th commemoration anniversary of Saint Pio’s passing, the relics of St. Pio will be touring around the United States, with a stop at Our Lady of Peace Church for public veneration. The 2018 tour follows last year’s sensational and headline-making tour that attracted an estimated 250,000 faithful. In addition, some of the most important secular media covered this event, including FOX NEWS, NBC, The Wall Street Journal, and The New York Times, to mention just a few.

Veneration officially opens in the Family Learning Center at 9am and will continue throughout the day until 7pm. The day will conclude in the church with a Mass in honor of Saint Pio at 7:30pm, which will be celebrated by the pastor, Rev. Brian Dinkel, IVE. The Saint Pio Foundation will sell books and items related to Padre Pio at the event.

The relics on tour include: Saint Pio’s glove, crusts from the wounds, cotton-gauze with Saint Pio’s blood stains, a lock of his hair, his mantle, and his handkerchief soaked with his sweat hours before he died.

All are invited to come venerate the relics and attend Holy Mass.

ABOUT ST. PIO OF PIETRELCINA

St. Pio was born on May 25, 1887 in Pietrelcina, Italy, and baptized Francesco Forgione. He first expressed his desire for priesthood at age 10. In order to pay for the preparatory education, his father, Grazio Forgione, emigrated in the United States on 1899, where he worked for several years.

The future saint entered the Capuchin order at age 15, taking the name Pio. He was ordained a priest in 1910 at the age of 23. During his lifetime, Padre Pio was known as a mystic with miraculous powers of healing and knowledge, who bore the stigmata. Stigmata is the term the Catholic Church uses to speak about the wounds an individual receives that correspond to the crucifixion wounds of Jesus Christ. They can appear on the forehead, hands, wrists, and feet.

His stigmata emerged during World War I, after Pope Benedict XV asked Christians to pray for an end to the conflict. Padre Pio had a vision in which Christ pierced his side. A few weeks later, on September 20, 1918, Jesus again appeared to him, and he received the full stigmata. It remained with him until his death on September 23, 1968.

In the Catholic Church, relics are physical objects associated with a saint or candidate for sainthood – part of the person’s body or something with which he or she was in contact. Relics are not worshiped, but treated with religious respect. Touching or praying in the presence of such an object helps a faithful individual focus on the saint’s life and virtues, so that through the saint’s prayer or intercession before God, the individual will be drawn closer to God.

ABOUT THE SAINT PIO FOUNDATION